Leadership of the College 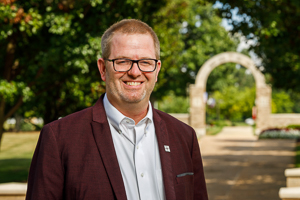 Michael Griffin, Ph.D., is the Senior Vice President and Interim Provost of Holy Cross College – a triple Domer, earning a B.A., M.Div, and Ph.D. at the University of Notre Dame.

In his role, he oversees college relations and the teams that work in student formation including admissions, as well as advises the college president on major policy matters internal and external to the college. He also is very active in the flourishing set of tri-campus collaborations with Saint Mary’s College and the University of Notre Dame.

He began his career working for the United States Conference of Catholic Bishops and then teaching at a Holy Cross Brothers high school in Washington, DC. returning to Notre Dame to enter formation at Moreau Seminary. Though he discerned this was not his path, he completed his Divinity degree and began working at Holy Cross College in 2004. While teaching, he earned his doctorate in Moral Theology. After graduation in 2014, his dissertation was published as a book, “The Politics of Penance: Proposing an Ethic of Social Repair.” He also co-edited a book on health care, medicine, and social justice, entitled “In the Company of the Poor.”

In 2015, he became Chair of the Holy Cross Theology Department and founding Director of the College’s Saints & Scholars Institute. During the spring of 2017, newly elected president, Fr. David Tyson, C.S.C., appointed him to the role of Senior Vice President. JudeAnne Wilson Hastings is the Associate Vice President for Communications and Development with a Bachelor of Arts in Communications Studies from Saint Mary’s college and an MPA in Not for Profit Management from Indiana University South Bend.

In her role, she oversees marketing and communication, development, the annual fund and planned giving. Part of her responsibilities also include building alumni relations and overseeing advancement events.

She began her career as the Director of Marketing for Signal Travel & Tours, Inc. handling all aspects of marketing. In 2000 she moved to Saint Mary’s College first as the Assistant Director of the Annual Fund then moving into the role of Director of Annual Fund in 2005. During 2010, she became the Director of Development with the Lafayette Catholic School System coordinating all development, enrollment, and marketing efforts for four schools within the Catholic school system. In 2014, she took the role of Director of Mission Advancement for St. Thomas Aquinas, the Catholic Center at Purdue, planning and directing all development activities including the Annual Giving, Major Gifts, Planned Giving and Stewardship. She returned to the Notre Dame, Indiana area in 2016 joining the Holy Cross College family as the Director of Alumni and Parent Programs responsible for all alumni and parent relations for the College. She moved into the role of Director of Development in 2017 providing leadership responsibilities for all aspects of all fundraising and was promoted to her current role in August of 2019. Monica Markovich is the Vice President of Finance and received a Bachelor of Arts from the University of Notre Dame and earned her Master of Public Affairs with a concentration in financial management from the Indiana University School of Public and Environmental Affairs.

In her role, she is the chief financial officer of the College.

Following graduation, she worked for the Indiana Department of Workforce Development, advancing from program manager to director of policy and programs for Adult, Career and Technical Education during her five years there. In that position, she managed a $25 million budget, a significant portion of which involved federal and state grants.

Before coming to Holy Cross College, she worked at the University of Notre Dame as an analyst for the Office of the Executive Vice President. She oversaw a variety of special projects, as well as conducted extensive analysis and drafted reports on strategic university issues. 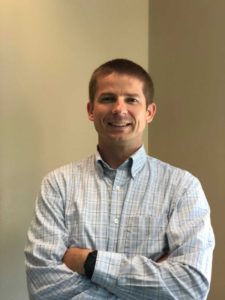 Andrew J. Polaniecki is the Vice President for Student Life and Dean of Students at Holy Cross College.  Before this role, Dean Polaniecki served as the Director of Campus Ministry at Holy Cross for ten years.

He first encountered the religious of the Congregation of Holy Cross as a Chicago youth while attending Notre Dame High School (NDHS) in Niles, IL. After graduating from NDHS, he attended the University of Notre Dame and studied philosophy, environmental science, and theology. During his time there, he spent three years as a member of the Old College Program, the undergraduate seminary for the Congregation of Holy Cross. After graduating from Notre Dame in 2003, he completed a Master of Arts in Religious Studies from Loyola University—New Orleans. While living in New Orleans, he taught theology and coached soccer and track and field at Ursuline Academy for two years and then at Jesuit High School for four years. Since returning to South Bend to work at Holy Cross College, he has helped plan and lead several pilgrimages to the St. Joseph Oratory in Montreal. He also led an immersion experience with college students to Ghana, West Africa, where they lived and worked with Holy Cross religious.  He also had the privilege of attending the canonization of Br. André Bessette in Rome in October 2010, and participated in the Father Moreau Heritage Immersion experience in Le Mans, France, in 2016.  He earned his Master in Business Administration from the University of St. Francis (Joliet, IL) in 2017.

He and his wife André, an adjunct professor at Holy Cross, and their five children—Gabriel, David, Leo, Agnes, and Matthew—live in South Bend, where they are parishioners of St. Joseph Parish.